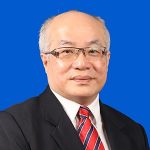 Professor Dr THONG Meow Keong studied medicine and trained in Paediatrics at the University of Malaya. He received genetics training in Singapore and was a Fellow in Clinical Genetics at the Women’s and Children’s Hospital, Adelaide and as a Senior Fellow at the renowned Murdoch Childrens Research Institute in Melbourne, Australia. He was recognized as the first board-certified clinical geneticist in Malaysia and helped established Clinical Genetics as a subspecialty in the National Specialist Register Malaysia.

He established the first Genetics clinic with genetic counselling service at the University Hospital Kuala Lumpur in 1995 and headed the Genetics & Metabolism Unit at the Department of Paediatrics. He received a Doctorate in Medicine from University of Malaya in 2004, for research on the molecular genetics of beta thalassaemia and discovering the molecular basis of beta thalassaemia in the Kadazandusuns in Sabah.

He has published over 100 peer-reviewed publications on research work done on genetic disorders that hitherto have not been well documented in the various Asian subpopulations. He co-authored 8 books, including Handbook of Hospital Paediatrics (2nd edition), Problem-based Learning in Medical Sciences and Rare Journeys of Love and 15 book chapters, including a chapter in the prestigious Oxford monograph Genomics and Health in the Developing World and presented in many national and international conferences, including 180 proceedings and 6 keynote lectures. He worked closely with the Ministry of Health Malaysia in developing the counselling module for thalassaemia and other clinical practice guidelines. He collaborated with the World Health Organization and March of Dimes in preparing a document on management of birth defects and haemoglobinopathies as well as rare diseases. He was the lead author for two policy papers on ‘Rare Diseases in Malaysia’ written in conjunction with the Institute of Democracy and Economic Affairs (IDEAS)

He was a Fulbright scholar at the Center for Diseases Control and Prevention (CDC) in Atlanta, USA and a past recipient of the 8th Royal College of Physicians of London and Academy of Medicine of Malaysia Annual Research Award, Australia-Malaysia Fellowship in Research Excellence, the Travel Award by the Asian Society for Pediatric Research Japan, University of Malaya Distinguished Service awards and several gold medals in ITEX and Biotechnology Asia invention and innovation competitions. In 2019, he received the Minister of Education of Malaysia Award for Curriculum Design and Innovation 2019 as well as the University of Malaya Distinguished Researcher in Science Excellence Award. He is also a reviewer for international journal manuscripts, research grant applications as well as an examiner for national and international medical examinations in Sydney, Melbourne, Dhaka and Hong Kong. He co-authored the new Malaysian Paediatrics postgraduate curriculum in conjunction with the National Postgradaute Medical Curriculum Writing project.

He was the past President of the Asia-Pacific Society of Human Genetics, founding Vice President of the Medical Genetics Society of Malaysia, Chairman of the Clinical Genetics sub-speciality committee of the National Specialist Register Malaysia, appointed member of the Education committee member in Paediatrics by the Malaysian Medical Council and President of the College of Paediatrics, Academy of Medicine of Malaysia. He was the Head, Department of Paediatrics, University of Malaya from 2009 – 2011 with the notable achievement of overseeing the successful transition of the Department of Paediatrics to the new Women’s and Children’s Health Complex of UMMC. He organized the 10th Asia-Pacific Conference on Human Genetics and is the founding National Advisor to the Malaysian Rare Disorders Society since 2004 and a Trustee of the Rare Disease Alliance Foundation of Malaysia. He helped established the Genetic Counselling Society of Malaysia. He organised the first UM-Chinese University of Hong Kong Certificate Course in Clinical Genetics and Genomics at the University of Malaya. He was also appointed the Head, Genetic Medicine unit of the University Malaya Medial Centre.

His current interests include delineation of rare disorders, preventive and curative strategies for genetic disorders, genetic counselling, inborn errors of metabolism. medical education and access to genetics and genomics services in developing countries. He is involved in gene therapy for patients and other clinical trials for genetic diseases. He has obtained over 20 research grants and has international collaborations with renowned centres in Australia, Saudi Arabia, USA, Japan and Hong Kong. He has been elected as a Fellow of Academy of Medicine of Malaysia, Academy of Medicine Singapore and Academy of Sciences Malaysia.

G2MC is a program of the Global Genomic Medicine Collaborative (GGMC)