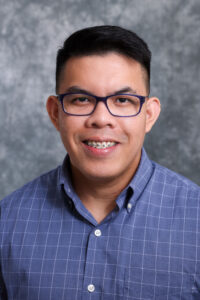 For our November G2MC Early Career Investigator profile, we’re proud to sit down with Nurse and Genetic Counselor, Peter James Abad. Abad is part of the faculty at the University of the Philippines Manila College of Nursing and also an affiliate of the Master of Science in Genetic Counseling program at the College of Medicine. He’s currently pursuing his Ph.D. in Nursing at the University of Iowa.

“My educational background in nursing and genetic counseling has provided me with the essential competencies to provide care to individuals and families affected with or at high-risk to develop genetic conditions,” Abad said, “I also facilitate clients’ decision-making regarding uptake of genetic tests and I provide counseling so they are able to cope and adapt with the genetic risks or the presence of a genetic condition in the family. My current practice focuses primarily on newborn screening and cancer.”

Abad’s resume extends beyond just his practice, he’s been a part of numerous organizations and societies, including the newly established Philippine Society of Genetic Counselors (PSGC).  “We envision the PSGC as the lead organization that advances the field of genetic counseling in the Philippines and the integration of genetic counseling services in the healthcare system,” Abad reports, “We wanted to make genetic counseling services available and accessible to all Filipinos especially now that genetic and genomic services and tests are increasingly becoming more available.” Abad is also the current Secretary of the Professional Society of Genetic Counselors in Asia (PSGCA).

When Abad isn’t busy with his practice or various organizations, he finds time to stay active and indulge in film, “I unwind and go to the fitness center at least several times a week. I am also a big fan of historical documentaries, courtroom dramas, and crime movies.”

Abad’s work and contributions speak for themselves, but he acknowledges this isn’t a journey he’s taking alone and would like to leave his story with a thank you, “My accomplishments to date are not my accomplishments alone,” he notes, “I would not have done it without the support of my family, my friends and colleagues in nursing and genetic counseling.”

G2MC is a program of the Global Genomic Medicine Collaborative (GGMC)