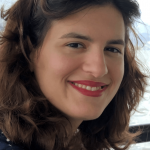 Ph.D. candidate, Laboratory of Pharmacogenomics and Individualized Therapy, Pharmacy School of the University of Patras

Stefania Koutsilieri is a Ph.D. candidate of the Laboratory of Pharmacogenomics and Individualized Therapy in the Pharmacy School of the University of Patras. After graduating with honors from the Pharmacy School of the National and Kapodistrian University of Athens (NKUA), she completed her Master’s degree in Pharmacology. In 2017, she was awarded a Ph.D. scholarship from the Onassis Foundation to pursue Pharmacogenomics research.

Her research interests include delineating the similarities and most importantly, the discrepancies between the pharmacogenomics information that is documented in the drug labels approved by the two major regulatory bodies (FDA, EMA) and renowned research consortia, like the Clinical Pharmacogenetics Implementation Consortium (CPIC), while she is also interested in the implementation of pharmacogenomics in low- and middle-income countries. Stefania is also actively engaged in a multicenter research project, touching upon the notion of polypharmacy and the catalytic role of Pharmacogenomics in optimizing drug treatment modalities in the current clinical setting. As of 2018, she is a CPIC member and subgroup leader of the ‘Journal commentaries of newly released guidelines’ of the CPIC Dissemination Working group.